Childhood at Versailles on the South Parterre 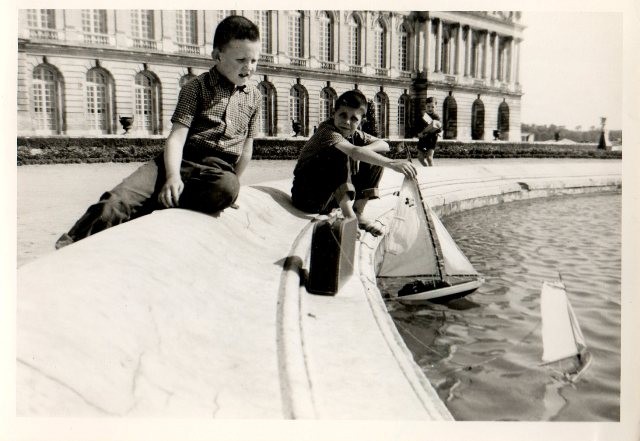 I am the little boy in the foreground of this picture. Further back to the right is my brother, Patrick. We were playing on the side of the pond of the South Parterre with a boat that our father had made. Back then, the people of Versailles used to go for a stroll with their children who played ball, they rented chairs and sat in the sun at a spot called “La Petite Provence” (Little Provence). You could see many soldiers in the park because Versailles was a garrison town. The Versailles of my childhood was a romantic Versailles where the highest treetops touched each other.

I also remember the sound and light show organised to gather funds for Versailles’ renovation in 1953 and the filming of Si Versailles m’était conté… (Royal Affairs in Versailles) that same year. I came on the day they inaugurated the electrification of the Palace’s chandeliers. The Grand Apartments, the Private Apartments, the Royal Opera – everything was open for the inauguration and you could go wherever you wanted! It was the first time that I felt like I was living in pre-revolutionary Versailles when there were all those courtesans and all the buzz!